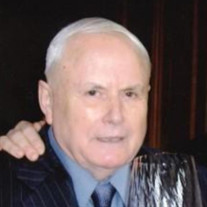 Anton 'Tony' Morell, 95 years old, of Fairview Park, Ohio, passed away after a prolonged illness on April 20, 2021. He is survived by his loving wife of 67 years, Katharine, his daughter, Gerti Morell, son, Anton Morell (wife, Sharon), son John Morell (wife, Jacqueline) and son, Richard Morell (wife, Michele). He was the beloved grandfather of seven grandchildren, Jason Morell, Alyssa Morell (husband, Cole Tomashot), Taylor Morell, Julie Morell, Victoria Morell, Carly Morell and Melia Morell. Anton was preceded in death by his father, Anton Morell, mother Terezia (nee Roth), sisters, Rezi, Anni and Gertrud. Born in 1925 in Bacsalmas, Hungary, Anton survived both WW II and its aftermath. He and his family became refugees in Germany where he learned a trade and met the love of his life. In 1955, Anton, his wife and daughter, immigrated to the United States and resided in Cleveland. He worked as a plasterer and later at Hopkins Airport in the maintenance division. Anton worked tirelessly to provide a better life for his wife and children, who he loved above all else. His strength, courage, compassion for others and great integrity were only but a few of his greatest strengths. He was a wonderful husband, exceptional father and grandfather, extraordinary friend and always a good neighbor. His loss cannot be expressed in mere words. Our father was the greatest man we ever knew. He was our everything. Visitation will be from 10am until 12 noon on Monday, April 26, 2021 at the Sunset Chapel located 6245 Columbia Rd., North Olmsted, Ohio 44070. Funeral services will begin promptly at 12 noon. Anton will be laid to rest at Sunset Memorial Park.

The family of Anton 'Tony' Morell created this Life Tributes page to make it easy to share your memories.

Send flowers to the Morell family.