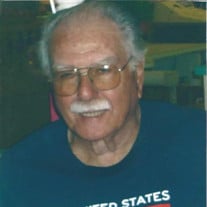 Donald Wallace Newport Sr. was born on September 12, 1930 the only child of Theodore and Mildred Newport of Fairview Park, Ohio. Donald passed on September 17, 2021 at Ames Family Hospice of the Western Reserve from complications of congestive heart failure. Don will be reunited in heaven with his wife Dorothy, son Donald Jr., and his parents. He is deeply missed by his children and sons-in-law Denise Dillman (Gary), Darlene Hoylman (Rick), Diane Crow (Terry), and Doree Beaune (Kevin), his grandchildren Christi Nichols (Todd), Georgianne Micco (Dayvid), Cody Dixon (Allison), Michael Crow (Abigail), Kevin Beaune (Laura), Kyle Beaune (Krystal), and Carol Crow. His many great-grand children will also miss the family times spent together. He will also be missed by his many sisters-in law and brothers-in law. Donald enjoyed bowling, golfing, wearing his American red, white, and blue, and supporting his Cleveland Browns and Cleveland Indians. He was a member of the Bentley Road Guys, North Olmsted Jay Cees, NAMI (National Alliance of Mental Illness), and numerous other social organizations. He was employed as a Computer Programmer for Cuyahoga County and in his spare time taught classes on computer applications. During retirement he spent many years as caretaker for his wife and son. Dad we cherish your unconditional love for your family and the sacrifices you made to care for us all. Visitation will be held at the Sunset Chapel at Sunset Memorial Park, 6245 Columbia Rd., North Olmsted, on Thursday, September 23, 2021 from 12PM-2PM with funeral services at 2:00. Private interment at Sunset Memorial Park. Memorial contributions can be made to NAMI or Hospice of the Western Reserve.

Donald Wallace Newport Sr. was born on September 12, 1930 the only child of Theodore and Mildred Newport of Fairview Park, Ohio. Donald passed on September 17, 2021 at Ames Family Hospice of the Western Reserve from complications of congestive... View Obituary & Service Information

The family of Donald W Newport Sr. created this Life Tributes page to make it easy to share your memories.

Send flowers to the Newport family.