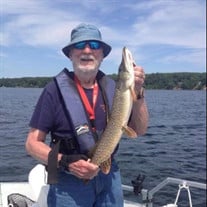 Douglas Ewan Cameron (79) died peacefully in his sleep on December 15, 2020. He was born in New Brunswick, NJ on April 5, 1941. He grew up in Oak Ridge TN where his father was a chemist with the Atomic Energy Commission (Manhattan Project). In 1954-55 he lived in Frankfurt, Germany where his father had a Fulbright grant to work at the Max Plank Institute. He graduated from Oak Ridge High School in 1959 and attended Miami University with an ROTC scholarship. He was a member of Theta Chi. He attended The University of Akron receiving his Masters in l965. He received his PhD in Mathematics from Virginia Technical Institute and State University in 1970, He taught at The University of Akron from 1970 through 1998 retiring as a Professor Emeritus of Mathematical Sciences. In his professional career he also taught at Ohio University (1976-77) and Clemson University (1992-93) as an exchange professor. January - June 1979 he and is family lived in Moscow, Russia (formerly the USSR) to study the history of topology. He published 27 professional papers and one textbook (Modern Abstract Algebra) with David C. Buchthal. He always acknowledged that his wife Nancy was the inspiration for his grants for Russian studies and his historical specialty. He was an active member of the Akron Jaycees and was on the Board of Governors of Akron Golf Charities. In retirement he and Nancy spent half the year at their home on Hubbard Lake MI and half in Copley OH. They also continued their love of traveling going to 106 countries as of January 2020. He was very active in the Hubbard Lake Sportsman and Improvement Association serving as East Side Director, Vice President, President, and Newsletter Editor. He received the Outstanding Member award in 2008. He was currently the President. He and Nancy were involved in Good Samaritan Hunger Center and Interfaith Caregivers in Akron. He published his first novel The Body in the Perch Pond in 2012 and went on to write 18 more ending with The Body in the Blaze in 2020. Lately he was working as a guide at the Sturgeon Point Lighthouse on Lake Huron. He precedes in death his wife Nancy Calhoun Cameron (whom he married in 1976), son Christopher (Rose), grandsons Matthew and Jack, daughter Laurel Shurlow (Rex), stepson John David Bokas (Katie) and three grandsons Cameron, Ian and Aaron, stepson Gary Andrew Bokas (Bill Mustard), stepson William Calhoun Bokas (Tanya), and brother Alex. He was preceded in death by his parents Angus and Jane (Gray) Cameron and his brother Allan. Memorials can be made to Hubbard Lake Sportsman Improvement Association, P.O. Box 111, Hubbard Lake MI 49747, the Alcona County Humane Society, 457 West Traverse Bay Road, Lincoln MI 48742 and the Alcona County Historical Society, P.O. Box 174, Harrisville MI .

Douglas Ewan Cameron (79) died peacefully in his sleep on December 15, 2020. He was born in New Brunswick, NJ on April 5, 1941. He grew up in Oak Ridge TN where his father was a chemist with the Atomic Energy Commission (Manhattan Project).... View Obituary & Service Information

The family of Douglas Ewan Cameron created this Life Tributes page to make it easy to share your memories.

Douglas Ewan Cameron (79) died peacefully in his sleep on December...

Send flowers to the Cameron family.