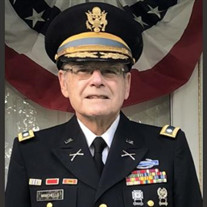 Ernest D. Minichello passed away on March 26, 2022 surrounded by his loving family. Ernest was born in Cleveland, Ohio, on April 19th, 1946 to Ernest A. Minichello and Mary T. (Rocci) Minichello. He lived with his family in South Euclid, Ohio, a suburb of Cleveland. Ernest was the oldest of his parents four sons followed by Dennis, Eugene and Michael. He attended St. Gregory the Great Catholic School and St. Joseph’s High School for boys, graduating in 1964. He was accepted into Ohio University, Athens Ohio, and graduated in 1968 with a Bachelors of Arts Degree. While at Ohio University he met his future wife Judith K. (Blauser) Minichello. They were married on December 23rd 1968 and enjoyed the next 54 years of their lives together. Following his graduation from Ohio University Ernest enlisted in the United States Army as an Infantryman, completing both his basic and advanced training at Fort Dix, NJ. Ernest was then sent to Officer Candidate School (OCS), 64th Training Company, at Fort Benning, GA. Upon graduation from OCS in March 1969 he received his commission as an Infantry Officer in the rank of Second Lieutenant. His initial posting was to Fort Ord, CA, as a training officer in the Basic Combat Training Group followed by Jungle Warfare Training in Panama. In September of 1969, 2nd Lieutenant Minichello was deployed to Vietnam where he was assigned to the 2nd Battalion, 3rd Infantry Regiment (The Old Guard), 199th Light Infantry Brigade. 2nd Lieutenant Minichello served as a Combat Infantry Platoon Leader in 3rd Platoon, Delta Company where he received a Combat Infantry Badge. He was then reassigned as a Tactical Operations Officer in the Headquarters of 2nd Battalion where he was promoted to 1st Lieutenant. Upon his return from service in Vietnam 1st Lieutenant Minichello was assigned to Fort Lewis, WA, and served as Officer in Charge of a detachment in the Advanced Infantry Training Group. He was discharged from active military duty in March 1971 and with his wife, Judy, moved back to Ohio and ultimately settled in Bay Village, Ohio, to raise their family and begin his civilian career with the Federal Civil Service. He first served in the Veterans Administration then the U.S. Department of Labor where he worked as an Investigator with the Office of Labor Management Standards until he retired in 2003. In addition to his civilian career he resumed his military service as a U.S. Army Reservist. His Army Reserve assignments included the 2077th USAR School, 2nd Psychological Operations Group, U.S. Forces Caribbean, and U.S. Atlantic Command. He retired from the U.S. Army Reserves with the rank of Lieutenant Colonel in 1997. Lieutenant Colonel Minichello was also active in several veteran organizations including the Reserve Officer’s Association, Military Officer Association of America, the Vietnam Veterans of America Chapter 15 (where he served as treasurer) and the American Legion Post 211 in Avon Lake, OH (where he served as Commander). He was also a member of the Joint Veterans Honor Guard which provides graveside military honors for deceased veterans in the Greater Cleveland area. Ernest and Judy have three children of whom they are very proud; Kristina (Christian) Hansen, Ernest C. (Yolanda) Minichello, and John (Kristen) Minichello. Ernest also leaves a legacy of ten beloved grand children; Rhyanna (Brad Ziebro) Wroblesky, Catriona Wroblesky, Acadia Hansen, Sigurd Hansen, Ernest “Christopher” Minichello, Mia Minichello, Yayla Blodgett-White, Rashaud Blodgett, Liza Minichello and Dominic Minichello. Ernest is also survived by his brothers; Dennis (Janine) Minichello, Eugene (Theresa) Minichello, Michael (Marianne) Minichello; Sister-in-laws, Janice (the late Donald) Kuhn, Kathy (the late John) Blauser, and many amazing nieces, nephews and cousins. Family and friends may call on Monday, April 4, 2022 from 12:00 Noon-2:30 PM at the Sunset Chapel, 6245 Columbia Road North Olmsted, Ohio 44070. Funeral services will take place at 2:30 PM at the chapel. Burial with military honors will take place on Tuesday, April 5, 2022, 12:30 PM, at Ohio Western Reserve National Cemetery, 10175 Rawiga Rd, Seville, OH 44273. Please meet at the Sunset Chapel, 6245 Columbia Road North Olmsted, Ohio 44070 at 11:00 AM to join the procession. In lieu of flowers, memorial contributions can be made in Ernest Minichello's name to "The Ohio University Foundation," designated for the Lt. Col. Ernest D. Minichello, B.A. 1968 Veterans Scholarship Endowment, and mailed to The Ohio University Foundation, P.O. Box 869. Athens. Ohio 45701, or online at www.ohio.edu/give. Memorial contributions can also be made in Ernest Minichello’s name to The Vietnamese Community Center in Cleveland, 7804 Madison Ave. Cleveland, OH 44102 www.vietnamcleveland.com/

Ernest D. Minichello passed away on March 26, 2022 surrounded by his loving family. Ernest was born in Cleveland, Ohio, on April 19th, 1946 to Ernest A. Minichello and Mary T. (Rocci) Minichello. He lived with his family in South Euclid, Ohio,... View Obituary & Service Information

The family of Ernest D. Minichello created this Life Tributes page to make it easy to share your memories.

Send flowers to the Minichello family.