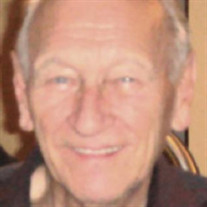 Franklin P. Abbott, Age 94. Passed away peacefully on May 7th. Beloved husband of the late Edith and Phyllis. Loving Dad of Greg (Lisa) and Lori (Andy) Gasho. Good friend of many. Franklin P. Abbott (94) was born on March 10, 1927 and raised on the West Side of Cleveland. He attended John Marshall High School (1945), Kent State University (BS, 1950), Case Institute of Technology (MS, 1956). He joined the Lubrizol Corporation in 1951 as a Research Associate in the field of Automotive Fluid Chemistry. Frank held several positions during his 42 year work career at Lubrizol. During this time, he was awarded 5 U.S. Patents and authored /co-authored three nationally published white papers in his field of endeavor. Frank was a member of several professional societies, including American Chemical Society (ACS), Sigma XI, American Institute of Chemists, and acted as Treasurer, Entertainment Chairman and Archives Committee member of the Local Section of ACS. He was active in the Episcopal Church and held various offices, along with Vestry appointments. Frank was a dedicated volunteer with the Cleveland Food Bank, with weekly service at the West Park Community Cupboard. Frank was active for many years as a tenor with the George Stone Singers, traveling around the country performing popular songs of the day. One of his favorite activities was playing tennis, with a wicked left-handed serve. Over the years, he won multiple championships. Frequent golf outings perfected his game, and weekly bowling leagues let him show off his left-handed hook. Anyone who knew him knew about his love of cars. Frank loved his 4 grand dogs (Sam, Trixie, Arnie and Floyd) and gave generously to many animal charities. Frank was married for 45 years to his loving wife Edith. Following her death in 1998, Frank was married to Phyllis for 16 years until her passing in 2017. After retirement he enjoyed travel (annual trips to Florida and the Outer Banks), gardening, sports, casinos, dining out – typical retirement luxuries. He enjoyed the company of both old friends and new, and most recently, sharing nightly dinners and movies with his devoted companion, Lois. Interment at SUNSET MEMORIAL PARK, North Olmsted on Wednesday, May 12th at 12:15 p.m.

The family of Franklin P. Abbott created this Life Tributes page to make it easy to share your memories.

Send flowers to the Abbott family.