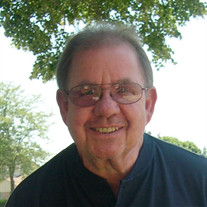 Gerald Paul “Jerry” Burke, 74, of Berea, Ohio passed away on February 28, 2021. Jerry was born on August 14, 1946 in Cleveland, Ohio to the late Milton Harold and Irene Loretta (Lorko) Burke. He is survived by his son Eric (Jennifer) Burke; grandchildren Alexis and Nathan Burke; brother Ron (Claudette) Burke; niece Jenny (Lou) Prete; great-nephews Louie and Matt Prete; great-niece Sarah Prete; countless friends -- especially Gail Helwig, Cindy Cordon, Tom Fessler, and Susie and Bob Colvin; and, of course, his canine companion, Storm. He is preceded in death by an infant daughter and son Ryan Patrick Burke. Jerry grew up on the west side of Cleveland, where he shared a ridiculously small bedroom with his brother Ron, which is probably why he was so short. He attended Cleveland schools and graduated from West Technical HS (Go Warriors!) in 1964, where he played football and wrestled. Fun fact: he once had to run for an entire football practice because a potential easy interception bounced off his stone hands during a drill. Another fun fact: he was part of a group of a handful of kids who were together for all 12 years of school, from elementary through high school. Legend has it they had some sort of organized crime-like business to sell papers and test answers. Someone should look into that. After high school, Jerry attended Bowling Green St. University, then settled in Valley City, OH after marrying Joyce Collins and starting a family. In 1974, the family relocated to Strongsville, where he lived for several years before moving to Olmsted Falls, and finally, Berea, where he resided until his death. His career as a civil engineer began at McKinney, McCann & Associates, where he worked for several years before working at other firms such as Bob Schmitt Homes, R.E. Warner & Associates, Guenther & Associates, and finally for A & F Machine Products Inc., where he worked until his retirement in 2020. He also did a tremendous amount of dad-volunteer work as a chauffeur, baseball coach, swing set assembler, pool maintainer, and muddy football uniform washer, among others. Jerry loved to joke around and always had witty banter or a “dad joke” at the ready, all of which were perfectly groan-worthy. Saturdays often involved watching the Three Stooges -- Curly only please, not Shemp thankyouverymuch -- and cackling like a five year-old along with his five year-old. He also loved a good murder mystery -- book, TV show, or movie -- including James Patterson books and the show Unsolved Mysteries. Oh, just one more thing -- he also loved Columbo. Jerry was also a lifelong die-hard Browns fan -- he was able to see them make it to zero Super Bowls, have more than 30 different starting quarterbacks, fail at Red Right 88, get beat by one 98-yard drive, and commit one ill-timed fumble on the 2 yard-line. He passed down this love of the Browns to his son, who decided that the misery should end at his generation; thus, Jerry’s grandchildren root for the Lions, which, in typical Browns fan fashion, is actually worse. Jerry will be greatly missed by everyone whose lives he touched. Please be with the family in prayer and reflection. Online memories and condolences may be left on Jerry’s memorial page at sunsetfuneralandcemetery.com. Please type or upload your favorite memories and photos, or create a video telling a story or favorite memory of Jerry. An outdoor memorial service (weather permitting) will be held for Jerry on Saturday, June 19, 2021 at 11 AM at Sunset Cemetery, 6265 Columbia Road, North Olmsted, OH 44070 In lieu of flowers, please consider a donation in Jerry’s name to the American Society of Civil Engineers (https://www.asce.org/) or the American Heart Association (https://www.heart.org/). Alternately, pour yourself a Rum and Coke and raise a glass in Jerry’s honor!

The family of Gerald Paul "Jerry" Burke created this Life Tributes page to make it easy to share your memories.

Send flowers to the Burke family.