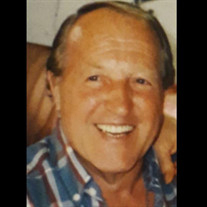 Germain Marc Chevrolet, 91, passed away peacefully on Saturday January 9th, 2021. He was born in Bonfol, Switzerland to the late Henri and Marie Chevrolet on September 21st, 1929. Besides his parents Germain is preceded in death by former wife, Patricia Chevrolet, passing on May 19th, 2020. Germain leaves to cherish his memory, sons Germain (Andrea) Chevrolet, David (Patty) Chevrolet, and daughter Dawn (George Cambouris) Chevrolet, adoring granddaughter Jessica Chevrolet, and family in Switzerland. One of the things Germain took pride in but rarely spoke of was a memory as a child while growing up in Switzerland was helping the Jewish people and American pilots that were shot down to escape and hide from the Nazi's during WWII on their family farm that bordered France. Growing up after the war, he became an avid soccer player, with both The Swiss National and Peugeot Teams wanting to recruit him. Due to family obligations, he was unable to join either team. He served time in the Swiss Army before immigrating to the United States, settling with family here in Cleveland and working at his families bar and bowling alley in the 1950's. He then spent most of his life in New York City as a professional interior painter with the International Brotherhood of Painters and Allied Trades, working in the homes of the rich and famous, such as Louie Armstrong, Carol Burnett and other celebrities. He also painted famous landmarks including Tavern on The Green, The Plaza as well as other famous hotels, and recording studios. Once retired, he spent his summers in Switzerland and traveling throughout Europe and vacationed in the Dominican Republic. He became a huge Browns and Indians fan after moving back to Cleveland, but still was a big fan of the New York teams; The Giants, Mets, Knicks and Rangers. In the early years he had season tickets to the Cosmos Soccer team, a sport close to his heart. It was in 2013 Germain moved back and spent the remainder of his years at The Weils in Chagrin Falls to be close to his family, where they affectionately called him "Chevy" and with French being his native language they occasionally called him "Frenchy". He will be dearly missed by many. A Celebration of life will be held at 2 p.m., Sunday, January 24, 2020, at the Sunset Chapel, 6245 Columbia Rd., North Olmsted. For those who are unable to attend Germain's services, please use the link below to view the services live on the day of the service: https://viewneral.zoom.us/j/97742792757?pwd=bnIzZjJ0TkxJbzFGU0ZjMHZtVDlKUT09

Germain Marc Chevrolet, 91, passed away peacefully on Saturday January 9th, 2021. He was born in Bonfol, Switzerland to the late Henri and Marie Chevrolet on September 21st, 1929. Besides his parents Germain is preceded in death by former wife,... View Obituary & Service Information

The family of Germain Marc Chevrolet created this Life Tributes page to make it easy to share your memories.

Send flowers to the Chevrolet family.