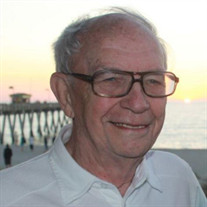 James F. Russell, February 8, 1932-November 12, 2021 "It Had To Be You. It had to be YOU. I wandered around and I finally found The somebody who Could make me be true Could make me be blue And even be glad, just to be sad, thinking of you. For nobody else gave me a thrill With all your faults, I love you still It had to be you, wonderful you. It had to be you." A lifelong-Lakewood resident and proud LHS January class of 1950 graduate, Jim found the love of his life, and bride of 65 years, Patricia Sanders, at Michigan State University while working as the breakfast cook in her girls’ dormitory. Growing up during the depression, as the son of Ralph and Eva Erndt Russell, and brother to Ralph, Eleanor, Robert, David, John, and Lenna, he learned about hard work as a Plain Dealer paperboy which served him well later in life while serving in the U. S. Army, working for American Steel and Wire as an engineer, launching the first packaging engineering department at American Greetings; as a night school law student at Cleveland Marshall School of Law; and finally as an attorney with Sanders, Sanders & Russell, Co., LPA for 54 years. Well known for his quick wit and dry sense of humor, he made people laugh, especially his wife; his children: Janet Donovan (Daniel), Richard Russell (Jan) and Judy Whalen (Bob); his grandchildren: Katharine Donovan McCord (Steven), Stuart Russell (Katherine), Jacqueline Donovan Sullivan (Kyle), Kurtis Russell, Bridget Donovan Bonnette (Derek), Matthew Whalen, Joseph Whalen, and Kristen Armbruster (Mike); his great-grandchildren: Kayleigh Armbruster, Henry James McCord, and dozens of nieces and nephews. He lived his 89 years to the fullest, playing decades of duplicate bridge as a Life Master, tripping the light fantastic across ballrooms and kitchens everywhere, cashing in chips at blackjack and craps tables in Vegas and on cruise ships on the Seven Seas, and traveling the world – each trip the trip of a lifetime. In his own words, “I’ve had a wonderful life.” For those who love and miss him, living your life to the fullest will be a lasting tribute to him. Private services will be held for immediate family.

James F. Russell, February 8, 1932-November 12, 2021 "It Had To Be You. It had to be YOU. I wandered around and I finally found The somebody who Could make me be true Could make me be blue And even be glad, just to be sad, thinking... View Obituary & Service Information

The family of James F. Russell created this Life Tributes page to make it easy to share your memories.

Send flowers to the Russell family.