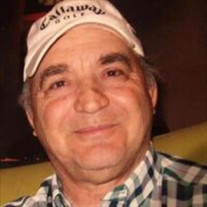 James R. Svetz, age 76, beloved husband of Barbara (nee Meyers); son of the late Adele (nee Chlebisch) and Andrew; brother of Robert (deceased) (Greta), Thomas (Martha), Frank (Kathy), Christine "Tina" Kuhn (Charles), Lois Stofan (Ronald), Hazel (deceased) and Andrew (deceased) (Toni); uncle and great-uncle of many. Jim was a proud graduate of West High School Class of 1962. He married Barbara Meyers, the love of his life, in 1964. They celebrated 56 years together this past March. He followed his family’s tradition as a tradesman and became a union Local 17 Ironworker. Jim joined the Navy as a SeaBee in 1968 and was stationed in Port Hueneme, California. Barb moved to Oxnard Shores to support Jim while he served in VietNam. This was when Jim adopted his first cat Josephine. They would go on to have 5 others through the years. In 1971 they moved back to Ohio ultimately living most of their lives in North Olmsted. Jim worked with Local 17 until his retirement in 2000. He took great pride in working on Jacobs Field and the BP Building in downtown Cleveland. Barb and Jim enjoyed many trips to Minnesota and many other states in recent years. Jimmy’s passion was always baseball, from playing sandlot as a young boy to skipping school to go to Municipal Stadium to watch his beloved Cleveland Indians. They were a source of daily joy. He had a great memory. His storytelling and attention to detail were like no other. His laugh was infectious. He will be especially missed by his niece Sheila who loved him so dearly and his best friend Jimmy Dietz. Passed away unexpectedly September 7, 2020. Funeral Service Friday, September 11, at 1 P.M. in the Chambers Funeral Home of North Olmsted, where social distancing will be observed and face masks required and where friends may call Thursday 1 - 4 P.M. and Friday one hour prior to service. Interment at SUNSET MEMORIAL PARK, North Olmsted on Friday, September 11th at 2 PM.

The family of James R. Svetz created this Life Tributes page to make it easy to share your memories.

Send flowers to the Svetz family.