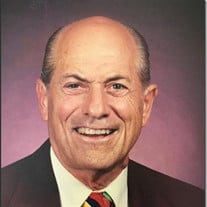 John D. McGinnis, 93 years young, Went home to be with his Personal Lord and Savior, Jesus Christ, on Thursday morning March, 10, 2022 at his daughters home in Rotonda West, Florida. He was born on October 20, 1928 in Ada, Ohio to the late... View Obituary & Service Information

The family of John D. McGinnis created this Life Tributes page to make it easy to share your memories.

John D. McGinnis, 93 years young, Went home to be with his Personal...

Send flowers to the McGinnis family.