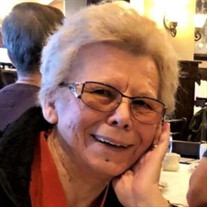 Katica “Katherine” Bikichky (formerly Rajkov) was born in Čurug, in the province of Vojvodina, Serbia, to Sava Rajkov and Danilka Borovica on September 28, 1937. Affectionately known as Kathy, she was the youngest of six siblings (Dragić, Stanko, Jovan, Ljubica, Krista), who always had a passion for music. At a very young age, she directed the choir in her church in Novi Sad and went on to attend music school where she learned to play the violin, melodica instrument, mandolin, accordion, piano, and organ. When Kathy was 18, she moved to Paris to follow her fiancé, George, whom she met in Novi Sad. There she began work as a seamstress and married George on August 8, 1959. In 1960, Kathy and George moved to Australia, and not long after, they had a son, Robert. Kathy began working in a meat packing plant while focusing on her love of music with a musical group she put together, called the Waldenses (Valdenžani), playing the accordion. She also directed the church choir. In 1969, Kathy and her family traveled to the United States where they moved to Akron, Ohio, and a year later, to Cleveland where Kathy started working again as a seamstress. She became the first woman to become plant manager for the Workwear Corporation and worked there for many years. She also formed the second Waldenses group, and they performed in many places. After leaving the Workwear Corporation, Kathy briefly worked as a dental technician before moving to work for an upholstery company. When her husband, George, retired, they decided to move to Florida, where they enjoyed several years of sunshine before moving back to Ohio. Kathy continued using her hands at the upholstery company up until 2015 when she and George moved to Illinois to be closer to their son, Robert, and his family. Kathy was always an active member in church where she lived, playing the organ and in orchestras. She loved music and animals and was always great with her hands, be it sewing for work or costumes for her musical group, or playing the keys of the piano. The last months of Kathy’s life were not easy; she battled cancer in her kidney after being in remission for several years, which was quickly debilitating. Surrounded by her family, she fought the disease until May 23, 2021 when finally her suffering ended, and she was able to rest in peace with her husband, George. Kathy leaves a legacy of great love, with a strong passion for music and God, behind. Kathy is survived by her brother, Dragić; her son, Robert with wife, Silva; and her granddaughter, Melissa. If anyone is unable to attend the services in person, please feel free to watch the services live with the link below. This link will be active on Friday at 12:55pm. https://viewneral.zoom.us/j/98061505111?pwd=NlhwUVpERDM2NFFBRjYxVmY5aWIrdz09

Katica &#8220;Katherine&#8221; Bikichky (formerly Rajkov) was born in &#268;urug, in the province of Vojvodina, Serbia, to Sava Rajkov and Danilka Borovica on September 28, 1937. Affectionately known as Kathy, she was the youngest of six siblings... View Obituary & Service Information

The family of Katherine Bikichky created this Life Tributes page to make it easy to share your memories.

Send flowers to the Bikichky family.