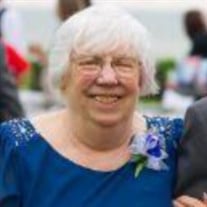 Mary Williams, age 84 (21) died peacefully on January 22, 2021. A loving and beloved wife, mother, grandmother, and great-grandmother, she was born February 29, 1936 in Cleveland, Ohio and resided in Fairview Park approximately 50 years. She met the love of her life, Drue, as a carhop at the Kenny Kings on Wooster Road in Rocky River and were married shortly after. They were side by side for 36 years until his passing. Among her greatest achievements were raising her baby brother, Jim Killin, into a wonderful man, completing her RN degree at the first graduating class at the Fairview General School of Nursing, beating breast cancer, and raising two children into kind, considerate, and independent adults. Mary was also in awe of reaching 84 years old and appreciated each day. She was a modern woman of her time. She began her career and traveled across the country to work at the Grand Canyon Hospital after nursing school. After returning from the Canyon, she worked at Lakewood Hospital and then Fairview Hospital (where she retired from). After retiring she worked as a lunch lady at North Olmsted City Schools where her grandchildren attended. Her first career choice was fashion design, so it makes sense that Mary was very creative and crafty. She made various clothing for the family and a lot of doll clothes, Halloween costumes, bonnets and nightgowns for the grandchildren. Her favorite things included music, playing cards, Christmas, and travel. Her passion for Christmas ran so deep she would endure the ordeal of putting up and decorating a 17 foot tree. She enjoyed singing in the Singing Christmas Tree at Great Northern Mall for a number of years. Her travels include most of the USA, including Alaska (one of her favorite trips), and her world travels, which include China, Mexico and Central America, the Caribbean, the Middle East, Europe, and Great Britain. Family and friends were always the most important things to her. Wherever she went, she made friends, and not just friends but life-long friends. She still had childhood friends, high school friends, nursing friends (4 South, 3 South, and Endo), and old and new neighbors. Various volunteering activities also introduced her to a number of other new friends. Her volunteer activities included a number of activities at Saint Brendan Church where she was a devoted member, such as holy dusting, bingo, and luncheons. She also volunteered for Fairview Park Meals on Wheels. This compassion and volunteerism was passed onto her children and grandchildren. She was preceded in death by her husband, Sherwood “Drue” Williams in 1996 and is survived by her brothers King Killin (Maria) and Jim Killin (Becky), son Dwight Williams (Gwen), daughter Katie Jordan (Terry), six grandchildren; Brooke Bullion (Todd) , Jordan Darrah (Kyle), Garrett Williams (Colton), Krista Williams (Mike); Corey Jordan (Elizabeth), and Mary Jordan (Pat) . Great grandmother of Liam and Luke Bullion. She truly was one of a kind living life to the fullest, and we who have known and loved her have been blessed. The family will receive friends on Thursday, January 28, 2021 from 4-7 PM in the Chapel at Sunset Memorial Park, 6245 Columbia Rd. North Olmsted; where the Funeral Service will be held on Friday at 12 PM. Interment to follow at Sunset Memorial Park. In lieu of flowers, family requests donations to Fairview Park Meals on Wheels, 20777 Lorain Road, Fairview Park, Ohio 44126.

The family of Mary M. Williams created this Life Tributes page to make it easy to share your memories.

Send flowers to the Williams family.