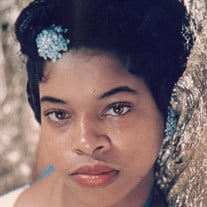 Odessa Mae Fluker was born January 5, 1939 in Parkin, Arkansas. She was the beloved middle daughter of five children from the union of the late Morris Fluker and Mollie (nee Clark) Fluker. Odessa passed away the evening of January 25, 2022. Odessa attended the Cleveland Metropolitan School District and graduated from John Marshall High School, class of 1957. Odessa also attended the former Fenn College in Cleveland, Ohio. Odessa went on to establish a lifelong career with Ohio Bell/Ameritech Corporation, where she started at age 16, then retired in management after 30+ years of service. After retirement, Odessa took an interest in travelling the world with some of her dear friends, Peggy and Karen. Those close to her knew her best as Jeri. The mystery of that nickname still holds as strong as her crazy love for Pigs and Crandall. When Odessa stopped travelling, she most enjoyed reading, photography, art, shopping, celebrating holidays with family, attending plays, preparing gourmet meals, and attending happy hour with friends/family. Although Odessa had no children, she was very instrumental in the lives of her nieces and nephews and will be greatly missed by many. Her love of art grew into a desire to become an artist. Subsequently, Odessa began taking art lessons and eventually composed her own portfolio of artwork that she was so proud of. Odessa was very competitive young woman, learning sports that most people in her environment never heard of let alone ever competed in. She took an interest in Fencing and was determined to master this sport. After only 3 years in, she had already won numerous titles across the Midwest. She went on to become the first African American to win the women’s Northern Ohio Division Championship while at Fenn College in April of 1964. She went on to secure over 43 medals and trophies while competing in this sport. Odessa also had a passion for Tennis. In later years, she enjoyed watching a variety of International Tennis Tournaments, especially if her favorite athlete Serena Williams was competing. Odessa was preceded in death by her parents, her brother Bobbie, her sister in laws Arvella and Mary as well as both her brother in laws, Robert and Willie Paul. Odessa leaves behind to cherish her memories her siblings, Earnice Henderson and Willie B. Hart, August Fluker Sr., sister in laws, Mauria Fluker and Jean Fluker, as well as a host of nieces and nephews, extended family and lifelong friends. The family will receive friends on Saturday, February 12, 2022 from 12:00 p.m. – 2:00 p.m. in the Chapel at Sunset Memorial Park, 6245 Columbia Rd. North Olmsted, where the Memorial Service will begin at 2:00 p.m. For those who are unable to attend, please click the following link to view the service at 2:00 pm: http://webcast.funeralvue.com/events/viewer/69028/hash:54D6CE1F2B5D7EAD

Odessa Mae Fluker was born January 5, 1939 in Parkin, Arkansas. She was the beloved middle daughter of five children from the union of the late Morris Fluker and Mollie (nee Clark) Fluker. Odessa passed away the evening of January 25, 2022.... View Obituary & Service Information

The family of Odessa M. Fluker created this Life Tributes page to make it easy to share your memories.

Send flowers to the Fluker family.