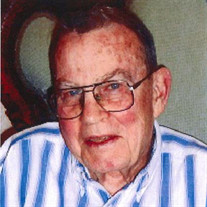 Dr. Richard L. (Dick) Dunn of Olmsted Township passed away peacefully Sunday November 21st, 2021, at 11:53 p.m. at the St. John Medical Center in Westlake, OH. Dick was born in Reading, PA, to Treverton E. (Ted) and Katherine (nee Finley) Dunn on March 20th, 1933. The family moved to the Cleveland area in Dick’s youth, settling in Bay Village. Dick graduated from Bay Village High School in 1951 where he developed his love of football, as a 4-year blocking back in the old single wing formation. After his freshman year at Colgate, where he also played football, he transferred to Denison University to be closer to home. He graduated from Denison in 1955 and shortly thereafter was accepted into the Western Reserve Medical School program. Following graduation from medical school, as a resident physician he met the absolute love of his life M. Jane (nee Dallas) Dunn and they married June 7th, 1958. Following residency Dr. Dunn enlisted as a physician in the U.S. Army and served as a Captain in the Quartermaster Corps in Chatellerault, France, from 1960 to 1963. Following his honorable discharge from the Army he established a private medical practice as an internist in Parma, OH. He developed a very substantial practice and was particularly well noted for his amazing ‘bedside manner’ as well as his diagnostic skills. He would frequently even make ‘house calls’ to patients on his way home from work, which was quite a rarity in that day and age. Though his medical practice placed a great deal of demand on his time, he always seemed to be able make time for his family. After 20 years of private medical practice Dr. Dunn was recruited by the Cleveland Clinic and served as a physician and researcher in their Department of Preventive Medicine for 11 years before retiring. Dick’s interests were diverse and quite voluminous. He and Jane were avid travelers, he was a skier, he sailed, was a scuba diver, was an avid fisherman and loved to read. He had a particular love of photography and in retirement developed that avocation into a semi-professional one. He specialized in landscape and wildlife photography. He and Jane traveled the world (only missing one continent) and displayed many of his photographs in multiple art galleries throughout Northeast Ohio. Dr. Dunn is survived by his loving wife of 63 years, Jane, his 3 children: son Richard (Rick) and his wife Lisa (nee Wolfe) Dunn, daughter Jennifer and husband Gary Tullis and daughter Kathy Dunn. He is also survived by his grandchildren Patrick Dunn, Timothy Dunn, James Dunn, Andrew Copenhaver, Eric Copenhaver, Mathew Bocian, Bryan Bocian and great grandson Alex Bocian; as well as 8 nieces and nephews. He was preceded in death by his brother Jerome. If there were one word that could be used to describe Dick Dunn; it would be gregarious. He would light up a room when he came in. He could put a smile on just about anyone’s face. His bedside manner as a physician was nearly unparalleled. There were no strangers in his world. Dick was a valued colleague. He was a giving, caring, devoted father and loving husband. He will be sorely missed! Services for Dr. Dunn will be Saturday November 27th, 2021, at Sunset Memorial Chapel, 6245 Columbia Road, North Olmsted, OH, 44070. Friends will be received at 10:00 a.m. A Christian service will follow at 11:00 a.m., officiated by Pastor Janis Montgomery of the United Church of Christ, Olmsted Falls, OH. In lieu of flowers the family would request that donations be directed to one of Dick’s favorite charities; The Greater Cleveland Food Bank, P.O. Box 74413, Cleveland, OH, 44194-0002. A military tribute will be held on Tuesday, January 4, 2022 at 11:00 AM at the Fountain of Memories, Sunset Cemetery, 6265 Columbia Road, North Olmsted, Ohio 44070.

The family of Dr. Richard Lynwood Dunn created this Life Tributes page to make it easy to share your memories.

Send flowers to the Dunn family.