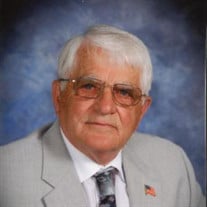 Robert Russell Tomanek, age 85, passed away Saturday, July 10, 2021 following a six-year battle with cancer. Bob was a lifelong resident of Avon Lake and a beloved member of the community. He was born on December 27, 1935 to parents, William and Elizabeth. Bob served in the United States Army as Military Police; he worked as a carpenter and in woodworking for more than 60 years; he was a sportsman who enjoyed hunting, fishing, baseball and football; and he was known for having the greenest grass on Walker Road. Bob was an ornery guy, he was a jokester, he could always put a smile on your face, he was a busy-bee who refused to sit down until the task was done (and even then, he found something else to do), and most importantly, he was a devoted husband, father, grandfather, great-grandfather, and friend who was cherished by all who knew him. Words cannot express how greatly he and his personality will be missed. Bob is survived by his loving wife of 57 years, Becky, of Avon Lake; daughter Kim (Mark Akers) and their children Bekah (Reed Palmieri) and Michael (Nicole); son Eric (Katie) of Greenville, PA; siblings Richard “Bones” (late wife, Maureen), Donna (Woodie DeChant), and Sally (late husband, Paul Beck); many grandchildren and great-grandchildren; and his dogs Tara and Hadley. He is preceded in death by his parents William and Elizabeth; siblings William, Ted and Doris (nee Schuster); son Donald and daughter Linda (nee Loesch); grandson Jordan Akers; and adoring pup, Zoe. Family and friends are invited to call on Monday, July 19, 2021 at 6:00 PM for a Memorial Service followed by refreshments and hors d’oeuvres at North Olmsted Assembly of God Church, 3874 Columbia Rd. North Olmsted, OH 44070.

Robert Russell Tomanek, age 85, passed away Saturday, July 10, 2021 following a six-year battle with cancer. Bob was a lifelong resident of Avon Lake and a beloved member of the community. He was born on December 27, 1935 to parents, William... View Obituary & Service Information

The family of Robert R. Tomanek created this Life Tributes page to make it easy to share your memories.

Send flowers to the Tomanek family.