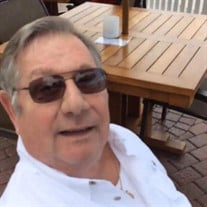 Not sure what to send?

Roger Wayne Reich, 80, was born on May 28, 1941 in Cleveland, Ohio to the late Francis F. and Frieda S. Reich. Roger graduated from John Marshall High School. He later worked for NASA, where he became instrumental in developing parts. Roger... View Obituary & Service Information

The family of Roger Wayne Reich created this Life Tributes page to make it easy to share your memories.