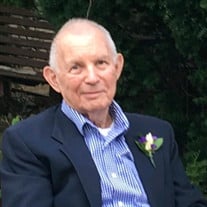 https://viewneral.zoom.us/rec/play/n7n8osugonJP7Oqn0SIQQgDcD8ImgWOAC2EUDrCgZLGxKR7QreK7-pMj6Tqlfy8nJgu2KyQSaCLcLZ7S.5p_cTJAIWA9D4UKa Roman Alexander Matysiak, 91, of Brook Park, Ohio, passed away peacefully at home surrounded by his family on Wednesday, April 7, 2021. Born in Allenstein, Germany, to the late Paul and Martha Matysiak. Roman immigrated to Cleveland in 1952 where he met his sweetheart, Evelyn. They were married on November 21, 1953 and shared their life and love until her passing last April. Roman cherished his family and was the father of Karen (Gary) Bellisario and Barbara (late Kenny) Whitcomb; grandfather (Opa) of Tom (Susan) Bellisario, Jennifer (Aaron) Bush, Kimmy (Milos) Petrovic, Rachael (Doug) Zimlich, Katie (Daniel) Bellisario-Allen, and Colleen (Richie) Whitcomb-Hardie. Great-grandfather of Thomas and John Bellisario; Alex and Charlotte Bush; Nick, Madelyn, Nolan and Henry Petrovic; Joshua and Lukas Zimlich; Benjamin Hardie, and the soon-to-arrive Evelyn Allen. Dear brother of the late Horst and Ruth. He is also survived by many cherished nieces, nephews, cousins, and friends near and far. Roman served in the German cavalry during World War II. After the war, he was a farm apprentice before immigrating to the United States. He worked as a master brewer with Erin Brew/Standard Brewing from 1952 until 1960 when he went on to a career in heat treating and metallurgy at AMAC Enterprises. His expertise and insight were sought by major corporations during his time at AMAC until his retirement in 2000. He loved listening to classical and big band music, gardening, playing cards, dancing, and television. Roman was an amazing cook who could take the simplest ingredients and create a wonderful meal. He passed down his love of cooking to both his daughters and six grandchildren. When there were family events or special occasions, Roman always impressed with his meals. Roman is best described as a gentleman who could charm you with his smile and warm brown eyes. He never lost his German accent and those closest to him were always given their own special terms of endearment. Family was important to him and he had a way of making each one of his children, grandchildren, or great-grandchildren think that they were his favorite! Family values and a hard work ethic were built into his soul. Visitation will be held on Friday, April 16, 2021, from noon until 2 pm at Sunset Chapel located at 6245 Columbia Road, North Olmsted, Ohio 44070. Funeral service will follow promptly at 2pm. Friends and family are welcome and asked to wear a mask and refrain from visitation if presenting any symptoms of COVID-19. Roman will be laid to rest next to his beloved wife, Evelyn, at the conclusion of the service at Sunset Memorial Park. Donations made to the family will be used for the medical care of Roman’s great-granddaughter Charlotte Bush.

The family of Roman Matysiak created this Life Tributes page to make it easy to share your memories.

Send flowers to the Matysiak family.