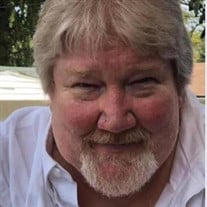 Russell Burton Stier Jr., 59, of North Royalton, Ohio passed away on September 24, 2021. Russ was born on April 5, 1962 in Windham, Ohio to Russell B. Stier Sr. and Jeanne Marie (Burnside) Stier who both preceded him in death. He grew up in Bedford, Ohio and graduated from Bedford High School in 1980. He is survived by fiancée and best friend, Debbie Grinnell; his dear sisters: Anna Marie (Bob) Balkovec, Sr., Twila (Ken) Zinda, Jr., and Sharon (John) Tiffe Sr., along with 8 niece and nephews and 8 great niece and nephews. Among those who will deeply miss Russ is Debbie's parents who loved him like a son, Glen and Linda Crabtree, their daughter Glenna who found a brother in Russ. Russ shared a strong bond and mutual love for Johnathan Grinnell who called him Poppy. He loved both close and extended family whom he kept in contact with over social media. His family was very special to him. Thank you to all who kept in contact with him through social media. He loved hearing from friends, old and new. Russ was a horse groomer in Florida, for a while, right after high school. He enjoyed working with those beautiful animals. He was an over the road truck driver for many years as well as a machinist by trade. He had many hobbies. In Russ's younger years, he was an avid deer hunter. He loved being out in the woods. He enjoyed riding his Harley motorcycle. It was one of his favorite things to do. He rode with his motorcycle club brothers as a group for quite a few years. He liked boating and fishing. He had been fishing several times this year and had been looking forward to his next fishing trip with his friend Jerry. Russ raised chickens and loved the fresh brown eggs for breakfast. For the past six years Russ took up beekeeping, bought Debbie a beekeepers suit and they enjoyed the hobby together, joining the Greater Cleveland Beekeepers Association. He became very knowledgeable regarding honeybees. He thoroughly enjoyed talking everything honeybees. He was always excited when it was time for honey harvesting. He was always willing to try new things and seemed to master those things in which he took a interest. Russ loved talking to people everywhere he went. He had a big personality and could be quite outspoken at times! He kept it real. He said what he meant and he meant what he said. He was very protective over the people he loved for example his sisters and he made sure Debbie was safe always. Russ had a big presence, personality and sense of humor that will be missed by many. Cremation services have been held and a celebration of life will be forthcoming. R.I.P to our best friend, partner, brother, uncle, mentor and just plain awesome human being.

Russell Burton Stier Jr., 59, of North Royalton, Ohio passed away on September 24, 2021. Russ was born on April 5, 1962 in Windham, Ohio to Russell B. Stier Sr. and Jeanne Marie (Burnside) Stier who both preceded him in death. He grew up in... View Obituary & Service Information

The family of Russell Burton Stier Jr created this Life Tributes page to make it easy to share your memories.

Send flowers to the Stier family.