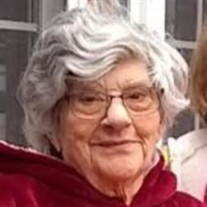 Sally L. Mihalega (nee Winkhart) passed away on Saturday, December 11, 2021 at the age of 83. She is preceded in death by her husband William in July of 1995, her parents Robert and Mareta and her brother Charles. Sally is survived by her loving children William (Carolyn, deceased), John, and Anna (Jeffrey Leithauser); cherished grandchildren Walter and Maria. Also left to mourn Sally are her siblings Dixie Lynch, Bonnie Winkhart and Melverna (Chuck) Adams; and sister-in-law Marian Korsakas. Sally was a loving mother, wife, grandmother, and friend to other humans, but she was also a caring and compassionate friend to the animals in her life, including many cats, dogs, chickens, horses, and even a stubborn goose named Charlie, who, for some odd reason, was not kind to her in return. She grew up in and graduated from high school in Navarre, OH. As the rest of Sally’s memories faded in her final years, there was still one big story about her life that she would persistently tell and retell and then tell some more. It was the story of how her Aunt “Punk” (and, yes, that is what people called her) invited Sally to move up to Cleveland to attend the Lakewood School of Practical Nursing. This was a life-changing opportunity in 1958 and opened up a world of education, careers, friendship, and adventure. Through friends she met her husband, Bill (a.k.a. Moose). As the story was told, they were introduced to each other in a horse barn. Sally and Bill settled down and raised a family on a small farm in Olmsted Township, OH. She would spend the rest of her life there, in the home that he built for her. Bill would always joke about how he first built the barn for his horses, and then he built the house for his wife. That was the kind of humor that she lovingly put up with throughout their 32 years of marriage. Due to a series of factors including the 1970s economy, a layoff, and concerns for her husband’s health, Sally went back to school and back to work. She attended Cuyahoga Community College to earn her associates degree and became a Registered Nurse in 1982. She did not realize it at the time, but she was a trailblazer. She was a wife, mother, and the breadwinner of the family, while her husband became a stay-at-home dad. She was a gerontological nurse for Cleveland Metro General Hospital (MetroHealth). Through this work, her world became even bigger. She bonded with hospital staff and patients who had diverse backgrounds and perspectives. She traveled to National Gerontological Nursing Association conferences in cities all over the United States, and in 1986 she had the rare opportunity to take part in an educational tour of rural and urban health systems in China. She retired from nursing in 1998. To this day, there are probably still doctors, nurses, and custodial staff from MetroHealth who miss and crave Sally’s batches of Christmastime peanut brittle. In her retirement, Sally frequently went to the pool at LifeWorks in Middleburg Heights and made many new friends there. She also reconnected with old friends from her early years in Cleveland. She and her crew enjoyed many activities, shopping trips, movies, and concerts. She also made regular trips “down home” to visit family. Sally became a grandmother when she was in her 70s. It was the energy and love from her grand twins that gave her an added spark in life and kept her going even after her physical and cognitive health progressively declined. A Celebration of Sally’s life will take place at 12:00 NOON on Saturday, March 26, 2022 at Sunset Chapel, 6245 Columbia Road, North Olmsted. Inurnment to follow at Sunset Memorial Park. If you wish to make a donation in Sally’s name, please donate to the Transplant House of Cleveland. https://www.transplanthouseofcleveland.org/

Sally L. Mihalega (nee Winkhart) passed away on Saturday, December 11, 2021 at the age of 83. She is preceded in death by her husband William in July of 1995, her parents Robert and Mareta and her brother Charles. Sally is survived by her loving... View Obituary & Service Information

The family of Sally Louise Mihalega created this Life Tributes page to make it easy to share your memories.

Send flowers to the Mihalega family.