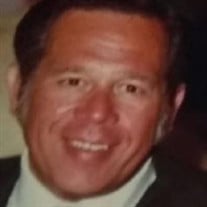 Wilbert Alfred Dreger, 87, passed into eternal life February 14, 2022. Born July, 6, 1934 In Cleveland to the late Alfred and Elizabeth (née Hundt) Dreger and was predeceased by his wife Joan (née Mojack) Dreger. He is survived by his sister Marge (Phil, deceased) Bode, nephews Dave (Debbie) Bode and John Mojack, Great-nephews Brian and Eric Bode and many cousins. A Graveside Service will be held on Saturday May 21 at the Sunset Memorial Park Cemetery, 6265 Columbia Road, North Olmsted at 11:00 am. We will meet at the front gate at 10:45am and follow to the graveside. A fellowship will be announced after the service. Memorials may be made to The American Heart Association. Will (Willie, Wimpy) grew up along with his little sister Marge, always helping her when he could. Once the family moved to their second home on Schaaf Road he became interested in the family business, farming. He would go down to the field and watch Daddy and Grandpa Dreger do their everyday chores to keep the vegetables healthy and ready to pick for market. One day, Grandpa encouraged Will to take an empty basket down the long row to help pick and carry it back to the Horse Buggy which was used to take the veggies to the West Side Market later. Grandpa could carry four baskets at a time, little did Will know that was the beginning of his weight lifting and receiving many trophies. Being strong and fit. Will was very good at sports in high school. He loved hls country and joined the National Guard after graduating. The next big step was getting married to his wonderful wife Joan Mojack. Then Will and Joan built their house right next to Daddy and Mom on one side and Grandpa and Grandma Dreger on the other side. After a while Daddy asked Will to be his partner in the business A. Dreger and Son which by now was not outside farming but taking care of greenhouses and raising the best tomatoes and sometimes lettuce too. Sadly, after a few years Daddy died and Will was on his own. One day a dog appeared at his side and just wouldn't leave his side. Will went to Marge's and said, “You can have the dog for Dave.” (her son). Well, that didn't work out because it turned out Dave was very allergic to the dog. So Will took him back home. His name was Tippy because he always had one ear up and one ear down. They became inseparable at work, home and in the car until Tippy died, that was a very sad day. After the greenhouse business, Will was in the car wash business for many years in Fairview Park, Ohio. Sometimes in the winter after the big snow and ice they would wash over 1,000 cars of salt from the roads. Those were very long days. When he retired from that business he decided to let Home Depot pay his salary and they would have to worry about getting the customers. On May 4, 2008 his wife of 48 years passed away suddenly after surgery. It was very hard to be alone but Will decided to continue working at Home Depot. During these years he became quite a good cook too and told the women at work what he did and how to do it, they were amazed and took his advice. I might add that Will was born at noon and always hungry. Our Mom was a very good cook and after breakfast always had delicious warm meals for lunch and dinner. That's where both Will and I learned all our cooking. In May of 2016 he decided to retire and move in with Marge and husband Phil in North Carolina to help them. Will attended the Cove Church with them all the time and really enjoyed it. He also did all the driving to little dally trips, especially when fall came with the trees in beautiful color. This was Will's favorite time of the year. When he still lived in Ohio he never missed driving to Amish country for the fall colors there. After Phil died of small cell lung cancer that November Will was a great help for Marge and just couldn't stop planting flowers, shrubs and of course delicious tomatoes. All the neighbors marveled at what he could do at his age. April, 2021 was the last time he was able to plant tomatoes because he had a heart attack on the 25th of April. He kept saying I’m going to beat this but after many hospital visits he died peacefully at 87 on Valentines day 2022 at Marge's home.

Wilbert Alfred Dreger, 87, passed into eternal life February 14, 2022. Born July, 6, 1934 In Cleveland to the late Alfred and Elizabeth (née Hundt) Dreger and was predeceased by his wife Joan (née Mojack) Dreger. He is survived by his sister... View Obituary & Service Information

The family of Wilbert Alfred Dreger created this Life Tributes page to make it easy to share your memories.

Send flowers to the Dreger family.