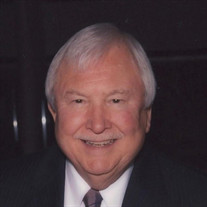 William Davenport “Bill” Guthrie, age 86, went home to be with the Lord on June 27, 2021. Bill was an Ohioan, born and raised in Cleveland, then Brook Park. His parents were William and Helene Guthrie. Bill graduated from Berea High School, then worked as a mechanic for NACA in Brook Park, where his father was employed. Taking the advice of a coworker, Bill decided to go to college. He studied at Fenn College, worked at NACA during his co-op quarters, and graduated in 1958 with a bachelor’s degree in Mechanical Engineering. Bill worked for five years as an automatic systems and controls design engineer for Honeywell Corporation, then was hired back into the renamed NASA-Lewis Research Center, where he worked 32 years, from 1963 to 1995. Bill’s highlight project as a NASA engineer was his contribution to the design of a 100 ft diameter vacuum chamber (a.k.a. Space Power Facility) at the Plum Brook station in Sandusky. Bill then entered the management ranks at NASA, eventually becoming branch chief of the facilities division. After retiring from civil service, Bill worked as safety consultant to a Hopkins Airport runway expansion project that required moving several large test facilities on the NASA property. Bill was married to Mary Lou Herrmann for 28 years, until she passed away in May of 2021. Their residences were in Strongsville, Vermilion, and Huron in Ohio; The Villages in Florida for 12 years; then Beavercreek, Ohio. Bill is survived by his three stepchildren Tony (Anne) Herrmann of Cleveland, Rick (Julie Heenan) Herrmann of Cincinnati, and Heather (Thomas) Bridgman of Beavercreek. Bill was earlier married to Mary Davidson for 33 years, living in Brook Park, then Middleburg Heights. He is survived by Mary; his three children Bill (Kristin) of Essex Junction, Vermont, Laura (Robert) Mizisin of Brunswick, and David (Sue Adler) of Strongsville; and six grandchildren Will (Maggie) Guthrie, Jay (Emily) Guthrie, Anna (Will) Craig, Amy Guthrie, Becky (Bill Keaton) Herman, and Molly Mizisin. Bill was predeceased by granddaughter Marcy Herman. He is also survived by six great-grandsons. Bill had a lifelong interest in cars, and he kept abreast of NASA rocket launches, viewing them whenever he could from near or far while living in Florida. He also travelled to many parts of the world on ship cruises with Mary Lou. Bill will be remembered by many as a kind man, a loyal and hard worker, and a good friend. He was a Christian believer, someone who was quiet about his faith but whose life and actions towards others were influenced by it. Bill’s remains have been interred at Sunset Memorial Park in North Olmsted. A memorial service will be held at 11:30 am on Friday, July 30th, at Grace Church, 7393 Pearl Road, Middleburg Heights, Ohio. Reception to follow at the church.

William Davenport &#8220;Bill&#8221; Guthrie, age 86, went home to be with the Lord on June 27, 2021. Bill was an Ohioan, born and raised in Cleveland, then Brook Park. His parents were William and Helene Guthrie. Bill graduated from Berea High... View Obituary & Service Information

The family of William D. Guthrie created this Life Tributes page to make it easy to share your memories.

William Davenport “Bill” Guthrie, age 86, went home to be with...

Send flowers to the Guthrie family.