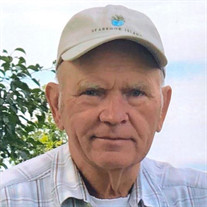 Adolf Krause, 81, of North Olmsted, Ohio went home to the Lord on December 12, 2021. He was born on December 29, 1939 in Germany to the late Oswald and Olga Krause. Adolf was a proficient and meticulous cabinet maker and owned his own home remodeling business for over forty years. His attention to detail with his work led to several accolades throughout his career. Adolf was awarded the Craftsmanship Award from The The Builders Exchange, Inc of Cleveland, for a Teak reception desk he built and designed for the George Gund Foundation. Also, he was recognized in Cleveland Magazine for an outstanding ceramic shower he completed in Westlake, Ohio. Additionally, Adolf was mechanically inclined and enjoyed working on cars and tinkering in his garage. As a devout Christian, his faithfulness in his Lord and Savior Jesus Christ and quiet stoicism was greatly admired. He will be fondly remembered as being a devoted husband, father, and grandfather. He found great joy in watching his son and grandson play soccer; and found peace in nature, fishing and biking. He will be missed by those who loved him best. He is survived by his beloved wife Bonnie (nee Engelhardt) of 53 years; loving children Charlene (Muth) Mahon (Kevin) and Scott Krause (Megan); cherished grandchildren Abbey, Joshua, and Campbell; sister-in-law Elfriede Krause; nieces Marge and Sue Costello; and nephew Dan Krause. He was preceded in death by his brothers Siegfried and Gotthard Krause. A memorial service will be held on Saturday, December 18, 2021 at 2 PM at Providence Church, 35295 Detroit Road, Avon, Ohio 44011. The family will receive friends from 1:30 PM until the time of service at the church. In lieu of flowers, contributions may be made to Christian Community School, 35716 Royalton Road, North Eaton, Ohio 44044 or online at christiancommunityschool.org. Online condolences and memories may be left on Adolf’s memorial page at sunsetfuneralandcemetery.com

Adolf Krause, 81, of North Olmsted, Ohio went home to the Lord on December 12, 2021. He was born on December 29, 1939 in Germany to the late Oswald and Olga Krause. Adolf was a proficient and meticulous cabinet maker and owned his own home... View Obituary & Service Information

The family of Adolf Krause created this Life Tributes page to make it easy to share your memories.

Send flowers to the Krause family.