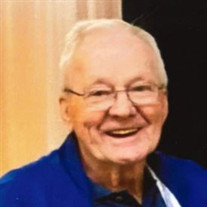 Carl Elmer De Witt, 90, of Berea, Ohio, passed away, Saturday January 8, 2022 at his home surrounded by his wife and daughter’s love. Carl was born January 12, 1931 in New Haven, Ohio to Minnie and Perry De Witt. He graduated from New Haven High School as Valedictorian of his class. He was a Korean War Veteran. He joined The United States Air Force after graduation and served for 7 years. He worked at NASA Glenn Research Center and retired after 30 years of service. He worked on many projects and received many awards. He was a big part of The Centaur Project back in the 60’s. He was also able to meet many astronauts and received an American Flag which was flown aboard the third flight of the Space Shuttle “Columbia” as it completed 130 revolutions of the Earth and traveled 3.4 million miles for all his contributions. He married his wife Carol James in 1967. On their first date, they went and saw Mary Poppins at the Berea Movie Theater. He enjoyed spending time with his friends and family. He loved being the life of the party. He was a prankster and jokester. A loved man with many nicknames. He enjoyed the outdoors and yard work. He spent many summers at his trailer on Catawba Island. He enjoyed the Lake Erie Islands and his favorite ride at Cedar Point was The Raptor. He was a very generous man and would lend a helping hand to anyone who needed it. He spent a lot of time volunteering in The Berea City Schools where his wife taught and daughter attended. Carl was a lover of music and dancing. He and his wife followed many local bands. He was a lover of all animals. He was known as the deer charmer. Carl is survived by his wife, Carol De Witt of Berea, OH and daughter Megan De Witt of Cleveland, OH; her significant other Vinny Cervellino of Akron, OH; two sisters Clara Baird of Bucyrus, OH and Delores Batesole of Fremont, OH. He was preceded in death by his parents, Minnie and Perry, and his sister Margene Robinson. Funeral services will be held at Sunset Memorial in North Olmsted, Ohio. 6265 Columbia Rd, North Olmsted, OH 44070 Calling Hours Thursday January 13, 2022 4pm-7pm Funeral Friday January 14, 2022 at 12pm

Carl Elmer De Witt, 90, of Berea, Ohio, passed away, Saturday January 8, 2022 at his home surrounded by his wife and daughter&#8217;s love. Carl was born January 12, 1931 in New Haven, Ohio to Minnie and Perry De Witt. He graduated from New... View Obituary & Service Information

The family of Carl Elmer De Witt created this Life Tributes page to make it easy to share your memories.