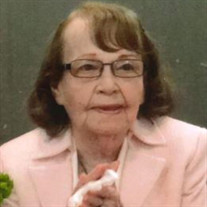 On Monday, January 17, 2022, Dorothy F. Reed (Dottie) loving wife, and mother of two children, passed peacefully at the age of 97. Dorothy was born on October 2, 1924, and raised in Cleveland, Ohio. She graduated from West Technical High School. On November 23, 1941, she married Ernest W. Reed. World War II began a few weeks later and impacted the first years of their marriage. Dottie worked for the Navy Department in Norfolk, Virginia, processing the belongings of deceased Sailors and Marines, and typing letters to their families, while Ernest served in the Navy aboard the USS Hubbard, DD 748 , in the Pacific. Upon returning home, Dorothy and Ernie lived in Berea Navy Housing until they purchased their first home in the Kamm’s Corners area. After retiring from the North Olmsted Engineering Department, Dorothy worked as a volunteer at Fairview Hospital for 23 years. Dorothy was preceded in death by her parents, Frank and Irene DeVries, her husband Ernest W. Reed, her brother Frank, and his spouse, Goldie, (All Deceased). Dorothy is survived by her two children Cherilyn Soltesz (Emil). And Daniel Reed (Carol). Dorothy is also survived by five grandchildren: Michael, Jeffrey, Jennifer, Dedra, and Patricia. As well as nine Great Grandchildren: Kayla, Colin, Ava, Erin, Gavin, Ethan, Elise, Audrey, and Alexa, and her lifelong friend Jeanette Zimmer. Dottie was a beautiful lady, a wonderful Mother, and a great partner to Ernie for over 50 years! Dottie will be missed by many! Calling hours will be held at Sunset Memorial Funeral Home, 6245 Columbia Road, North Olmsted, on Friday, January 21, 2022 – between 4:00 and 8:00 PM. A memorial service and burial will be on Saturday, January 22, at 10:00 AM, at Sunset Memorial Cemetery.

The family of Dorothy Reed created this Life Tributes page to make it easy to share your memories.

Send flowers to the Reed family.