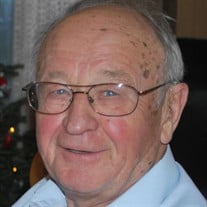 ERWIN TOMM May 9, 1931 - February 26, 2021 Entered into eternal rest to be with his Lord and Savior on February 26, 2021. Erwin is survived by his beloved wife of 60 years, Hildegard (nee Neumann)Tomm; Loving father of Harry Tomm, Richard (Pam) Tomm, and Manfred (Lisa) Tomm; Affectionately known as Opa to Joshua, Hannah, Nathaniel(Teresa), Sharyn, Derek, Nikki, and Kayla. He is survived by his siblings Jenny Rutsch (Gerhard), and Eddie Tomm (Edeltraud). He was preceded in death by his parents Julius and Frieda (nee Lietke) Tomm, dear sisters Wally Prill (Albert, deceased) and Elly Rautenstrauch (Werner, deceased) and granddaughter Sarah. He immigrated from Germany to the United States in 1952, settling in Cleveland, Ohio. He became a naturalized citizen and then went on to serve in the US Army in August 1956 (active duty) for two years and then transferred to the Army Reserves with honorable discharge on August 1962 as a machinist. He continued his machinist apprenticeship as a civilian and became a journeyman mold maker. He met the love of his life in Cleveland and married Hildegard on June 18, 1960. They resided in the West Park neighborhood of Cleveland and were actively involved in the West Park Friends Church. Erwin also was involved with the Gideons International for many years. Erwin had an entrepreneurial spirit which led him to start his own mold and die company in June 1965 and this then led to him experimenting in the emerging field of plastic injection molding. He used his skills making various inventions, for which he received 17 different US patents. He served as a mentor to several apprentices that came up through his company and was able to share his knowledge and values with them. The family is grateful for the prompt, compassionate and professional care he received from the Hospice of the Western Reserve. In lieu of flowers, the family suggests donations in Erwin’s memory to the West Park Friends Church 3780 W 140th Street, Cleveland Ohio 44111, the Gideons International Processing Center P.O. Box 97251 Washington, DC 20090-7251, or to the Hospice of the Western Reserve 17876 St Clair Avenue, Cleveland, Ohio 44110. A private burial service will take place in the chapel located at Sunset Cemetery in North Olmsted, Ohio. Family and friends are invited to view the virtual funeral ceremony which will be streamed live on March 3rd at 11:30am and available for online viewing any time thereafter on the cemetery’s website: www.sunsetfuneralandcemetery.com. Chapel Service Link Below: https://viewneral.zoom.us/j/91503093007?pwd=aUNnc0lXNnRaWU5MbVV5SVhueFk0dz09 Graveside Service Link Below: https://viewneral.zoom.us/j/92931650640?pwd=UmcwOGJDWG9Jd3BDZ3V5L1VkdG0wQT09

ERWIN TOMM May 9, 1931 - February 26, 2021 Entered into eternal rest to be with his Lord and Savior on February 26, 2021. Erwin is survived by his beloved wife of 60 years, Hildegard (nee Neumann)Tomm; Loving father of Harry Tomm, Richard... View Obituary & Service Information

The family of Erwin Tomm created this Life Tributes page to make it easy to share your memories.

Send flowers to the Tomm family.