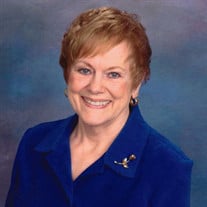 Georgia "Jo" Koontz Swanson - 10/12/1934 - 1/29/2022. Born in Ashland, Ohio, daughter of Arline and Franklin Koontz of Ashland. Jo is preceded in death by her brother, Dr. Franklin Koontz Jr. in 2007. She married Allan V. Swanson in 1955, and they lived in Berea, Ohio, all of their lives. She is survived by her children, Devora, Douglas (Jan), and Caryn (Dwayne); her grandchildren Mason (Miho) and Riley Losh, and Dashell Swanson, and two great grandchildren, Kai and Claire. Dr. Swanson graduated from Ashland HS in 1952: Baldwin Wallace University with a B.A. in 1956; Kent State University with M.A. in 1972; Bowling Green University with Ph.D. in 1982. Dr. Swanson taught for the Berea Schools for seven years, and subsequently at Baldwin-Wallace for 33 years, retiring in 1999. She was a member of the Phi Mu sorority. While teaching for BW, she was an active faculty member, serving as the first woman elected chair of the faculty. An ardent supporter of women, she created and maintained the COSROW column for the United Methodist Church in Berea; she also created roles for Women in History, a troupe that performs famous roles of Ohio women. As a member of the United Methodist church for over 60 years, she sang in the choir, and in 1999 was recognized by the U.M. General Board of Education recognized her in 1999 for her exemplary teaching. Additionally, she joined the BW Singers after she retired, and received BW's Outstanding Educator Award in 2006. A Memorial Remembrance is planned for Sunday, February 13th, at 3:30 p.m. at the United Methodist Church of Berea, 170 Seminary Street, Berea, Ohio 44017. If you have a story that you would like to share with the family, please send it to [email protected], where we will publish it in the bulletin of the service. In lieu of flowers, the Swanson family would appreciate contributions to the Georgia Swanson Scholarship at Baldwin-Wallace.

The family of Georgia "Jo" Swanson created this Life Tributes page to make it easy to share your memories.

Send flowers to the Swanson family.