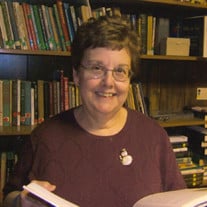 Janet Kay Hoskin, 79, of Olmsted Township, Ohio passed away on March 9, 2021. She was born on March 29, 1941 to the late George N. and Margaret (nee Scott) Pesch in Cleveland, Ohio. Beloved wife of the late Roger Hughes Hoskin of 56 years; loving mother of Jeffrey Hoskin, Margaret (John) Richardson, and Beth Guildoo; treasured grandmother of Paul Richardson, Audrey Guildoo, Colin Guildoo and Abigail Guildoo; dear sister-in-law Rosamond Pesch. Janet is preceded in death by her brother Jack Pesch. Janet’s selflessness was grounded in her belief and dedication to Jesus’ teachings. She demonstrated this best by living her life by example. She dedicated her life to teaching and nurturing children by creating an environment where they could grow, find their own unique personalities, and pursue their own interests without judgment. In this manner she raised three children, taught dozens and dozens of preschoolers, and spent as much time as possible with all her grandchildren whom she was so proud of. Everyone who had Jan in their life knew that she would always be there for them… and she always was. No one knew this better than her loving husband Roger. The bond they shared seemingly surpassed any time and any place. They leaned on each other daily to get through life’s challenges, celebrated each other’s achievements, and found so much joy in the success and happiness of their friends and family. In her late teens, Janet was a member of the Rainbow Girls. She graduated from Parma High School in 1959. She was a pre school teacher and was also the Director of Religious Education at Olmsted Community Church in Olmsted Falls from 1990-2006. In addition, she Led a Bible study group and wrote curriculum for the preschool Sunday School class at Olmsted Community Church. At the church, she was also on many committees, including Stephens Ministries and Koinonia. Janet was a 1994 graduate of Defiance College. A private Memorial Service will take place on Saturday, March 27, 2021 at 10 AM. You may join the family virtually by visiting Janet's memorial page at www.sunsetfuneralandcemetery.com and clicking on the livestream link provided https://youtu.be/wSZ5HJlqLCo. Janet and Roger will be laid to rest together at Chestnut Grove Cemetery. In lieu of flowers, contributions may be made in Janet’s honor to Olmsted Community Church in Olmsted Falls, 7853 Main St. Olmsted Falls, Ohio 44138. Online condolence’s may be left on Janet’s memorial page at www.sunsetfuneralandcemetery.com.

The family of Janet Kay Hoskin created this Life Tributes page to make it easy to share your memories.

Janet Kay Hoskin, 79, of Olmsted Township, Ohio passed away on...

Send flowers to the Hoskin family.