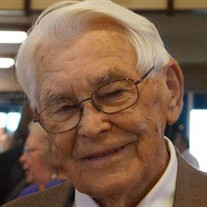 Janis Vaskis, 96, died peacefully at his home in Broadview Heights, Ohio. A memorial service will be held Monday, March 2, 2020 11:00a.m. at the United Latvian Evangelical Lutheran Church, 1385 Andrews Ave., Lakewood, Ohio. Family will receive friends one hour prior to the service. Janis was born in Grostona, Latvia, the son of Andrejs and Eline Vaskis. He arrived in Des Moines, Iowa in 1950. He and his wife Biruta were married that same year. They made Des Moines their home for the next 35 years. Janis is survived by his daughter, Ilse Hazners (John) of Broadview Heights, Ohio, his son Andrejs (Kayla) of Des Moines, Iowa, grandchildren Karina Foltzer (William) of Parma, Ohio and Sandra Koch (Jonathan) of North Royalton, Ohio, and two step-grandchildren, Vanessa Lein (Matt) and Charlie Kling of Des Moines, Iowa. He was very proud of his great grandchildren Robert, Lukas, Ethan, Eric and Lindsey. He is also survived by two nieces Baiba Kuntz of Winnetka, Illinois and Ieva Sifers of Des Moines, Iowa. He also has many relatives in Latvia. Janis was a lifelong member of the Latvian Evangelical Lutheran Church in Des Moines, the United Latvian Evangelical Lutheran Church of Cleveland, and various Latvian Societies in Iowa and Cleveland. Janis was a loving husband and father. He loved vocal music and was involved in directing, as well as, performing in various choirs and ensembles. He also loved theater. He has performed in plays since childhood, once sharing the stage with his daughter and granddaughter. In his later years, he wrote several plays which were performed by the local Latvian theater group. The love, advice and guidance that he showed will be deeply missed by all.

The family of Janis Vaskis created this Life Tributes page to make it easy to share your memories.

Janis Vaskis, 96, died peacefully at his home in Broadview Heights,...

Send flowers to the Vaskis family.