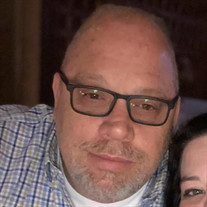 Kenneth R Dotson age 52, passed away suddenly on Tuesday, January 19, 2021 in North Carolina. Kenneth was born November 21, 1968, to Ronald and Theresia (nee Stich) Dotson, and raised in North Ridgeville, Ohio. He worked for UPS as a truck driver and was a member of the International Brotherhood of Teamster Union 71. Anyone who had the pleasure of meeting Ken, left his presence with a smile on their face. He was a man of his word and he would give the shirt off his back to anyone who needed it. Not only was he a wonderful husband, father, son and brother but he was a friend to anyone who knew him. He is survived by his adoring wife, Carolyn (nee Martin); son, Seth Dotson; daughter, Meadow Dotson; his parents, Ronald and Theresia Dotson of Grafton, OH; two sisters, Charlotte (Tom) Worcester, Renee (Frank) Bruno all of North Ridgeville, Ohio; many nieces, nephews, great nephews and an abundance of friends. Friends and family may visit from 12pm until 2pm on Saturday, February 6th 2021 at Sunset Memorial Parks Westwood Abbey Mausoleum 6265 Columbia Road, North Olmsted, Ohio 44070. A Memorial Service officiated by Reverend Chuck Behrens will take place that same day at 2pm in the Westwood Abbey Mausoleum. In lieu of flowers, a trust fund is going to be set up for Ken's children so please consider donating to the go fund me that was established. https://www.gofundme.com/f/ken-dotson-memorial-expenses

The family of Kenneth R. Dotson created this Life Tributes page to make it easy to share your memories.

Send flowers to the Dotson family.