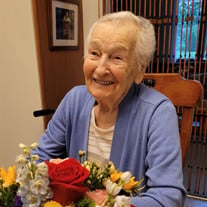 If you were unable to view services for Mariia, please revisit her graveside services below. https://www.econdolence.com/mariiarazdorina/ Mariia Razdorina, 89, of North Olmsted, Ohio passed away peacefully on Sunday, August 29, 2021. In lieu of flowers, please make charitable donations in her name to: St. Sergius Russian Orthodox Church, 6520 Broadview Rd, Cleveland, OH 44134, or The Bridge Church, 27070 Detroit Rd, Westlake, OH 44145. Mariia was born on June 17, 1932 in Russia to the late Peter and Proskovia (nee Artsebasheva) Sevrukov. Beloved wife of Semen Radionovich Razdorin (deceased); loving mother of Anatole (Rita) Razdorin (deceased), Yuri Razdorin (deceased), and Olena (George) Harpster; cherished grandmother of Maya (Daniel) Simanovsky, Marina (Daniel) Pinchi, Oleksandr “Alexander”, and Megan’ treasured great grandmother of Mihal', Mayan, and Leah; dear sister of Alexsandra (deceased), Anna (deceased), Nicholay (deceased), Nina (deceased), Valentina (deceased), and Vinyamin. As a child during WWII, she knew hunger but worked in the fields to feed the soldiers. Because of that, she only finished 3 years of schooling but her field work qualified her as a WWII veteran. Later she moved to Tula county where she worked as a coal miner, hauling coal carts up out of the mines. She met and married Semen there and had two sons. The younger son suffered from meningitis, as a baby, that led to his mental handicap. Their family responded to their country's call to move to Volgograd county to restore agriculture. Mariia said that they found their daughter in a cabbage field. :) Always looking for a better life for their family, in 1968 they moved to Donetsk, Ukraine (USSR), where her brother, Vinyamin, and sister, Valentina, had already settled. She worked hard in the factory where a work injury made her blind in her right eye but she continued working there until retirement. The time came to be a grandmother and she helped to raise Oleksandr before her daughter moved to the USA. Her oldest son had moved to Israel and her youngest son died before civil war broke out in Ukraine. She continued sewing, knitting, helping and socializing with those around her, being her lovable self. She was a good neighbor, enthusiastic, and a chain that connected her family together. With the difficult times and progressing age, she took care of her ill husband, running between gunshots and bombs to get medicine for him. Her husband passed away after 61 years of marriage. Then Mariia survived three strokes before coming to the USA to live with her daughter. After almost five years, we hope she found a peaceful life up until her passing. Mariia's family would like to thank all of the friends and neighbors who have been so supportive. Graveside services will be held at Sunset Memorial Park on Thursday, September 2, 2021. Please meet at Sunset Chapel, 6245 Columbia Road, North Olmsted, Ohio by 11:45 AM.

If you were unable to view services for Mariia, please revisit her graveside services below. https://www.econdolence.com/mariiarazdorina/ Mariia Razdorina, 89, of North Olmsted, Ohio passed away peacefully on Sunday, August 29, 2021. In... View Obituary & Service Information

The family of Mariia Razdorina created this Life Tributes page to make it easy to share your memories.

If you were unable to view services for Mariia, please revisit...

Send flowers to the Razdorina family.