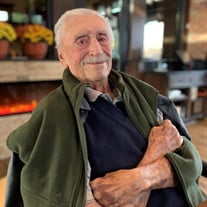 Oct. 9, 1021 - Jan. 24, 2022 Birthplace: Cleveland, Ohio Resided in: Westlake, Ohio Robert Francis Tuneberg, age 100, beloved husband of Mary (nee Dotchkoff) for 72 years. Dear father of Robert S. Tuneberg, Jeffrey W. Tuneberg and Lynn M. Mazur. Loving grandfather of MIchelle, Christine, Jason and Spenser. Loving great-grandfather of 9. Robert graduated from Shaker Heights High and served in World War II in the South Pacific as a paratrooper and proud member of the 11th Army Airborne Division. He was awarded multiple campaign medals and three Bronze Stars. He matriculated to Western Reserve University on the G.I. Bill and earned a bachelor’s degree in finance. He met his future wife, Mary, at Western Reserve and they were married on June 26, 1949 at Old Stone Church in downtown Cleveland. Their wedding reception was celebrated at Springvale Country Club in North Olmsted. Robert and Mary resided in Lakewood and Robert earned his credentials as a Certified Public Accountant, working at Peat, Marwick. They moved to Westlake in 1958. Robert went on to serve as Treasurer of Chromalloy America, Corp. Lakewood Industries and Benjamin Rose Institute before retiring to a private accounting practice that served golf courses and individuals. Robert was an avid cyclist and would regularly ride from Kamm's Corners in Cleveland to Elyria and back with the West Side Wheelers. Later in life, he acquired a passion for golf, winning local senior tournaments and scoring two holes in one in his career. He was a founding member of the Westlake Demons Club (Westlake Demons Athletic Boosters) and quietly supported various charitable organizations including City Mission. Robert’s life centered on his family and he devoted himself to the education and success of each of his children and grandchildren, finding personal joy in all their activities and successes. In lieu of flowers, donations may be made in Robert’s memory to, The City Mission, 5310 Carnegie Avenue Cleveland, Ohio 44103. Private services and interment will be held at Sunset Memorial Park in North Olmsted.

The family of Robert F. Tuneberg created this Life Tributes page to make it easy to share your memories.

Send flowers to the Tuneberg family.