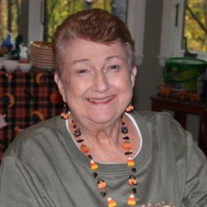 Please be with the family in prayer and reflection as they privately celebrate the life of their beloved Sandy. A recording of Sandy’s Celebration of Life Service will be available via the link below on Saturday, November 13, 2021 at 2 PM. http://webcast.funeralvue.com/events/northstar/62968/hash:7994DF539708EA54 Sandra (Sandy) Letitia (Stone) Strong, 82, of Elyria, Ohio went home to be with the Lord on October 23, 2021. Sandy was born on January 16, 1939 in Elyria, Ohio to the late Katherine (Pfaff) and Lowell Stone. She was also raised, in part, by her grandparents, Letitia (Jones) Pfaff and Arthur Pfaff whom she deeply loved and admired. As a child, Sandy excelled in piano and dance, including ballet, tap, jazz, and baton. She taught and performed dance for many years and ultimately was accepted as a Rockette at the Radio City Music Hall in their tap line. Instead of pursuing this opportunity, she decided to commit to the two loves of her life: teaching and Joseph, her loving husband of 59 ½ years. After graduating from Baldwin Wallace College in 1960, Sandy began her teaching career in health and physical education, teaching in Lorain Public Schools, Mercer Island Schools in Washington, and Elyria High School where she finalized her career as a drama and speech teacher. She loved running the drama department at Elyria High School and directing and producing plays/musicals and especially had a passion for working with young people. She made a meaningful and significant impact in the lives of the many youth she worked with over the years. Sandra was an extraordinary woman whose passions, accomplishments, and community impact were numerous. She taught drama classes, was the Director of Lorain County Pioneer Theater and provided drama programs at the Lorain County Community College’s “College for Kids”. She was involved in starting the Lake Erie Dance Theater where she served as President and Production Coordinator. Sandy was also very actively involved in the Women’s Auxiliary to the Lorain County Dental Society where she served for 16 years as President. She was recognized with the “Golden Apple Award” by the Alliance of the Ohio Dental Association as well as a national award, the “Thelma J. Neff Distinguished Service Award” from the Alliance of the American Dental Association. She was also the Director/Coordinator and one of six writers/performers of the professionally produced musical dental health marionette show, “Once Upon A Planet” which was performed in many schools, organizations around the state, local television, and was circulated nationally. In addition, she was a Girl Scout leader, American Red Cross Instructor, served on the PTA, taught computer classes to senior citizens, served many years on committees with the League of Women Voters, was a member of the Elyria Education Association, and was a Daughter of the American Revolution. She was also an active member and activities chair of the sorority Zeta Tau Alpha, Delta Chapter at Baldwin Wallace College. Her hobbies included bridge (with her bridge group since 1987), tennis, golf, playing piano and organ, making plastic canvas creations, carving marionettes, genealogy, working on the computer, playing Monopoly and other games with the grandchildren, spending time with friends and various craft projects. She loved to organize and adored the holidays, especially Christmas and Halloween which she loved to decorate for and share gifts with others. Sandy was a perpetual optimist, who always had a smile on her face, a positive attitude, and saw the best in everyone. She loved meeting people and had a gift for making friends with everyone she met. She had a positive impact on every one whose lives she touched. Most of all, Sandy loved her family and said, “my biggest enjoyment in life is being with my daughters and five grandchildren.” She was a loving, generous, devoted wife, mother, grandmother, friend, and teacher. Sandy will be deeply missed by her loving family, including husband, Joseph (Joe) Strong, daughters Kimberly (Kim) Strong Lytle (husband, Darren) and Sheryl (Sheri) Strong Betz (husband Brian), and grandchildren, Megan (Lytle) Grant (husband Chris), Christian Lytle, Justin Lytle, Brandon Betz, Ashley Betz, and sister-in-law JoAnn. She was preceded in death by her adoring grandparents Letitia (Jones) Pfaff and Arthur Pfaff, parents Katherine and Lowell Stone, sister Cheryl Stone, and in-laws Joseph and Thelma Strong. The family invites you to leave online condolences and memories on this memorial page. In lieu of flowers, contributions can be made to the Sandra L Strong Youth Creative and Performing Arts Fund through the Community Foundation Lorain County at https://www.peoplewhocare.org/funds This fund supports opportunities for youth to participate in programs, lessons, camps and other educational activities in the creative and performing arts.

Please be with the family in prayer and reflection as they privately celebrate the life of their beloved Sandy. A recording of Sandy&#8217;s Celebration of Life Service will be available via the link below on Saturday, November 13, 2021 at 2... View Obituary & Service Information

The family of Sandra Letitia Strong created this Life Tributes page to make it easy to share your memories.

Please be with the family in prayer and reflection as they privately...

Send flowers to the Strong family.