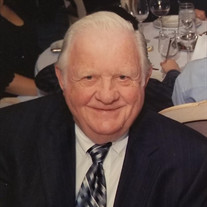 Walter R. Kraus, age 92 of Westlake and formerly of Florida, passed away December 7, 2021. He was the beloved husband of 60 years to Alice (nee Youngblood); the loving father of Cindy (Al) Fotheringham and Kit Kraus; the cherished grandfather of Amanda Fotheringham, Alex (Savannah) Fotheringham, Brian (Megan) Fotheringham; and the dear brother of the late Jean (Glen) Ashby. Born in Cleveland, Ohio in 1929, Walter Kraus began a long and accomplished life that began in the Great Depression. During those hard early years, Walt developed the traits that would serve him well throughout his life. Like many of his generation, he went to work at a young age to help his family make ends meet. It was always said there wasn’t a job that Walt didn’t do at some point in his life. From early on, it was obvious that Walt had a passion for all things mechanical. Walt was an engineer at heart and enjoyed working on all types of automobiles, model planes, and watching the Cleveland Air Races. He attended West Tech High School and began taking classes at Baldwin Wallace College. Before he could finish a degree, Walt was drafted into the US Army and sent abroad to fight in the Korean War. He served his country proudly in the Field Artillery unit and earned his honorable discharge in 1952 with the rank of Sargent. After returning home from the war, Walt enrolled at the Rochester Institute of Technology in New York and finally earned his degree. Upon graduation, he relocated to Cape Canaveral, Florida where he worked in the labs of the Mercury and Apollo Space programs. It was here that he met the love of his life, Alice, who also worked as a chemist in that early Space program. They married in 1961 and had two daughters. The family later relocated to Dayton, Ohio, as Walt began the next stage of his career, first with the Mead Corporation and then to the job he would keep for the rest of his working life, at Wright Patterson Air Force Base. Walt worked closely with the US Air Force as a civilian contractor on aeronautical reconnaissance equipment. Walt retired after two decades at Wright Pat and incredibly in all that time, never missed a day of work. Walt lived life to the fullest, from hosting Halloween and neighborhood parties to pursuing his love of travel, starting with a month long trek to Florida in a Ford Model A in the 1940s to the many trips internationally and throughout the United States with his wife by his side. His wife, Alice, was his treasure and biggest supporter. He and Alice made a point to visit many friends, fellow Korean War soldiers, and family throughout the years. With Walt’s love of photography, all these wonderful moments are captured and chronicled in rooms full of photos, slides and videos, preserving the images of the people and places he loved. He was a man with a great heart and will be dearly missed as a wonderful husband, brother, father, uncle and friend.” The Memorial Service will be announced on a later date. Please leave online condolences and memories on Walt's memorial page at www.sunsetfuneralandcemetery.com In lieu of flowers, contributions may be made in Walt's memory to Wounded Warriors Project online at https://www.woundedwarriorproject.org/donate

Walter R. Kraus, age 92 of Westlake and formerly of Florida, passed away December 7, 2021. He was the beloved husband of 60 years to Alice (nee Youngblood); the loving father of Cindy (Al) Fotheringham and Kit Kraus; the cherished grandfather... View Obituary & Service Information

The family of Walter R Kraus created this Life Tributes page to make it easy to share your memories.

Walter R. Kraus, age 92 of Westlake and formerly of Florida,...

Send flowers to the Kraus family.