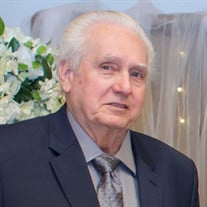 William B. Cassell, Jr, age 80, passed away on Sunday, December 12, 2021. with his loving wife and family at his side. He is preceded in death by his parents William and Della Cassell; and his sisters Billie Jean Abell, Irene Howard and Rita Meadows. William is survived by his beloved wife of 58 years and 5 days, Diane; his daughters Laura (Kevin) Allen and Melisa (Dennis) Feliciano; his cherished grandson Eric (Danielle) Feliciano; sister Vonda (Roy) Russell; and 2 great-grandchildren Henry and Isabella. Beloved brother in law to Frances Willson and Beloved Uncle to many. William’s family will receive friends and family from 5:00-8:00 PM Tuesday, December 21, 2021 at Sunset Chapel, 6245 Columbia Rd, North Olmsted. Funeral Services will commence at 12:00 NOON on Wednesday, December 22, 2021 following visitation prior from 10:00 AM until time of service. His interment will be in Sunset Memorial Park. Family requests that all in attendance wear masks. William was known to his friends as Bill Cassell and was born to the late William B. Cassell Sr and Della in Williamson, West Virginia. After moving to Cleveland he met his wife Diane at The First United Pentecostal church on 48th Street and Franklin Ave. They were married December 7th, 1963. They were blessed with two beautiful daughters, Laura and Melisa. Bill raised his family in the church, was a youth teacher and at one time he even went on to pastor his own church. He remained steadfast in his faith, witnessing at his places of employment and to everyone he met. At Abundant Life Church he was active in the prison ministry, attended youth rallies and many other church activities. He met lifelong friends at each church he attended. Most recently he attended the Branch Community Church in Parma where his late father attended. Bill worked at The St. Regis box company for 21 years and later retired from The Ferro corporation. When he wasn't working or attending church and church activities he spent time tinkering with and repairing cars, woodworking, reading and studying the Bible. He was the most loving and devoted husband and father. Bill passed on his work ethic, Faith and love of family to his two beautiful girls. He adored them and would do anything for them. When they married he accepted their husbands as family, treating them as he would his own sons. Bill delighted in his only grandson Eric and was a big influence in his life. He was proud to have Eric attend church with him and watched him grow into a responsible young man. He took great pleasure in seeing him marry and become a wonderful father of his two precious great grandchildren whom he adored. Bill enjoyed his short trips with family and many trips to Kentucky to see Laura and Kevin. A trip to New York City to see Eric’s College Graduation and do some sightseeing was one of the most exciting. Bill loved the family's many pets through the years and they loved him. Three of them in particular held a special place in his Heart; Tramp, a stray dog that won all of our hearts, Star, Diane's “little white dog” and Shadow, his cat who he always referred to as his “good little girl.” Many called him teacher, some called him pastor and others called him friend. Bill was a kind and generous soul. He will be deeply missed by his loving family and friends. Please join us for Bill's Christmas Celebration of Life. You may join the family virtually by clicking on the link below for at 12:00 PM. http://webcast.funeralvue.com/events/northstar/65736/hash:4F3F97AF9E8969EE

William B. Cassell, Jr, age 80, passed away on Sunday, December 12, 2021. with his loving wife and family at his side. He is preceded in death by his parents William and Della Cassell; and his sisters Billie Jean Abell, Irene Howard and Rita... View Obituary & Service Information

The family of William B. Cassell Jr. created this Life Tributes page to make it easy to share your memories.

Send flowers to the Cassell family.